FAQ / FREQUENTLY ASKED QUESTIONS
Q: What is an LED/L.E.D. (Bulb)?
A: Light Emitting Diode, are basically like tiny light bulbs that fit into an electrical circuit, that are super efficient, with high output (now providing 1,000~5,000 Lumens per LED), and with long lasting life expectancy (up to 50,000 hours). Generally/99% of time the LED are permanently installed into a light, and are not user replaceable (exception are a handful lights that use an LED  "Module", enter "module" into the search box of our site to find these models).

Q: You have multiple LED choices listed, which LED should I get?
A: Each LED has specific pro/cons compared to others, so just depends on your intended use, this answer also changes year to year/sometimes month to month due to constantly evolving LED technology.
2015~2017 The common/popular choice is the CREE XM-L2 (which replaced the XM-L) ~ depending on light it is installed into, it provides up to approx 1,400 lumens +/- per LED, and offers best "general purpose beam" characteristics.
The next popular choice is the CREE XP-L HI Domeless LED (which is now used instead of the old XP-G/XP-G2), and gives slightly less Lumens than the XM-L2, but beam output is more focused/tighter/brighter, thus is best for those wanting maximum reach/high LUX output.
2017+ CREE XHP35/50/70 HD & HI LED series is quickly replacing the XM-L2/XP-L HI LED in many lights, and Lumens are approx. 2,000/3,000/5,000 per LED, with HD or HI options. The XHP HD LED beam is similar to XM-L2 (general purpose), and XHP HI LED beam is similar to XP-L HI Domeless beam (focused/tighter for maximum reach), the catch is that these high voltage LED, require high amperage power to run them. Thus battery/power source will determine which light model these high power LED can be used in, and, user must use high quality name brand batteries that are rated above 8amps.

2019/2020 there is a new kid on the block ~ the Osram CSLPM1 LED. The Osram CSLPM1 offers the highest luminance (cd/mm2) for it's size and a low voltage requirement, producing a narrow beam and long range ~ ideal in smaller lights that have a lower voltage and a smaller reflector.


PHOTOGRAPHERS: For those wanting best beam color/rendering, the NICHIA 219 LED is the champion.
On average the Nichia 219 LED produces approx 1/3rd to 1/5th the Lumens of the CREE LED's, but, they produce the most pleasing and "accurate" output with average CRI rating of 92+ (vs CRI of 75 +/- for CREE NW). The Nichia is very popular with the photography/medical/aircraft mechanic type users, those who want/need maximum color accuracy. (see notes below about Tints and CRI below)
We also have several custom built lights using specialized high output LED's ~ such as Red, Green, Blue, Amber, Cyan, InfraRed/IR, UltraViolet/UV, etc output (which far exceeds the output from a white light with a special filter applied in front of it).

Q: What is a HI / Domeless LED?
A: Traditional everyday common LED have a clear epoxy "Dome" lens/optic over the die/semiconductor for gathering up and focusing the light output. "HI" is High Intensity (vs traditional Domed HD High Density)
a "de-domed" LED means someone has removed the dome via cutting/grinding etc after the LED was manufactured.
a "domeless" LED was manufactured with a flat lens rather than a domed lens.

Q: What is Color Temperature~CCT. What is "K" / "Kelvin"?
Q: Should I get COOL or NEUTRAL Temperature LED?
A: Color Temperature is a measurement in Degrees Kelvin (K) that indicates the hue/tone of a specific white type of light ~ higher color temperatures (5500K or more) are "COOL" (green–blue) colors, and lower color temperatures (2700–3000K) "WARM" (yellow–red) colors. Most common LED's are available in COOL or middle of the road (4000-5000K) "Neutral" range, while an incandescent bulb output is typically WARM.
see also Color Temperature and Kruithof Curve.
Q: Cool White/6000-6300K or Neutral White/4000-4300K Color Temperature LED?
A: Bright bluish~COOL LED have been around for a while, but due to recent developments in LED technology - we now have a choice in tint and color rendering - with the high output and efficiency of LED!
Output color is a personal preference - some people don't like the bluish~COOL color of LED preferring the yellowish color warm light from a typical incandescent bulb, and some people don't like the yellowish/white color of an incandescent bulb preferring the cool color of typical fluorescent lighting. 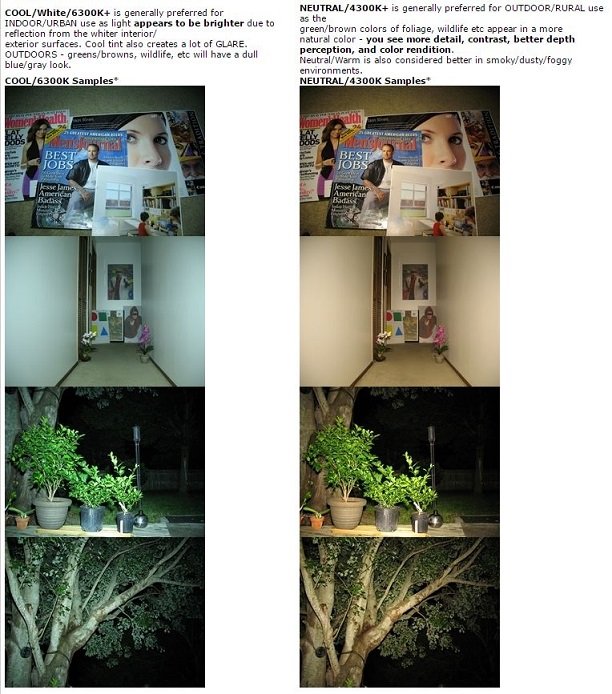 Interestingly - when a user compares two identical flashlight using identical reflectors - one with Cool White LED, and one with Neutral White - our BRAIN says the yellowish NEUTRAL is MUCH dimmer than the bluish COOL... but look again, most users can actually see a lot better and clearer with the NEUTRAL light.

NOTE: Most of today's LED CCT/Temperature offerings are not quite as extreme as the above pics show (COOL is now less blue, NEUTRAL is now less yellow) - but the above is a quick visual to "see" the differences between the two color temperatures...

NOTE 2: Every monitor/device displays colors differently, and every monitor/device typically has been user adjusted based on the users personal preferences - the above pictures were taken using a standard "daylight" setting on camera - and may display on your monitor slightly more or less Cool/Warm than in actuality. (on our color calibrated systems, these pics look like what we "see" in person)

Q: Which color temperature/CCT should I get - COOL or NEUTRAL?
A:  Tint Color and Color Rendering is a very subjective matter. Different tint Color and rendition may be preferred for different applications, and different people/eyes will have varied color preferences! But wait, there is more...

Q: What is CRI - Color Rendering?
A: CRI is a quantitative measure of how well a light source makes the color of an object appear to human eyes. The Color Rendering Index (CRI) is a scale from 0 to 100 percent indicating how accurate a "given" light source is at rendering visible colors ~ the higher the CRI, the better the color rendering.
Light sources with high CRI are desirable in color-critical applications such as photography, cinematography, medical users, aircraft mechanics and the like - people who need/desire to reproduce the colors of various objects more faithfully/correctly. NOTE: CRI is independent of Tint/Color/K Temperature!
(EX. there are Neutral and Warm tint lights with LOW CRI, and there are Cool Tint lights with HIGH CRI).
Also, generally a high CRI light has a less lumens than a comparable low CRI light.
A quick color chart comparison (4/2018)

Q: I don't care about tint color, I just want brightest?
A: COOL LED are still leading in lumen output over NEUTRAL LED, but not by much anymore.
With today's high output LED - NEUTRAL tint can now be as close as 6-7% of the Lumen output of similar Cool White LED, and human eyes typically can't see less than 30% difference in lumen output.
But, output TINT/Color differences will be very obvious, one being bluish, while other is yellowish.
Interestingly - when a user compares two identical flashlight using identical reflectors - one with Cool White LED, and one with Neutral White - our BRAIN says the yellowish NEUTRAL is MUCH dimmer than the bluish COOL... but look again, most users can actually see a lot better and clearer with the NEUTRAL light.

Q: I am color blind - will this make a difference?
A: Absolutely! About 8 percent of males, and 0.5 percent of females, are color blind in some way or another, whether it is one color, or a color combination... this effects how the user "sees" and uses light.
Generally, a color blind user will not see the benefits of the different color tints - and just goes with the brighter cool tint regardless of their intended use, or, will use a tint that looks best to them (one of our regular customers who is color blind, says NEUTRAL looks significantly brighter to him!).

Not sure if you are Color Blind? Here is a quick test... Ishihara Color Test

Interesting BBC News article: Do you See What I see? http://www.bbc.co.uk/news/science-environment-14421303
Can you trust your eyes/Brain? Amazing shade illusion will make you see the light. https://amazingvids.net/incredible-shade-illusion/
Optical lightness illusion. (study of visual perception). https://mymodernmet.com/lightness-illusion-explained
And another Brain Twister. How Many Black Dots Illusion http://www.iflscience.com/brain/this-12-black-dot-illusion-is-blowing-a-lot-of-minds/

Q: Can the tint and/or output be altered?
A: Certainly - by using Colored Lens/Filters, or Diffuser Films - one can temporarily change the output tint/color to just about any color and/or floody beam desired - though at a bit of a loss in output.
Common Lens Filters that can be purchased from the light Manufacturers are Diffuser, Yellow/Amber, Red, Green, Blue.
Want more tint or diffuser options? http://www.leefilters.com/lighting/colour-list.html#
Check out the several hundred sheets of 3.5"x1.5" Lee Filters/Swatch book that can be purchased (directly from from Lee Filters) for $2 +Postage, giving you virtually unlimited output colors from your light (cut filter disks to size and insert in front or behind light lens).
More Info: http://www.candlepowerforums.com/vb/showthread.php?320811-Changing-LED-Tint-With-Filters
and 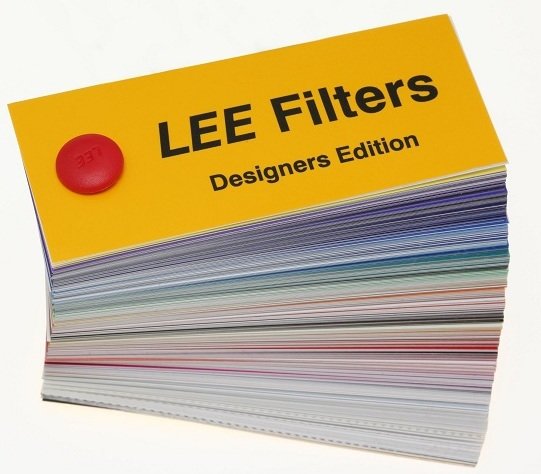 Brightness = LUX, A measure of the intensity of the center spot.
Throw = how far the beam reaches. 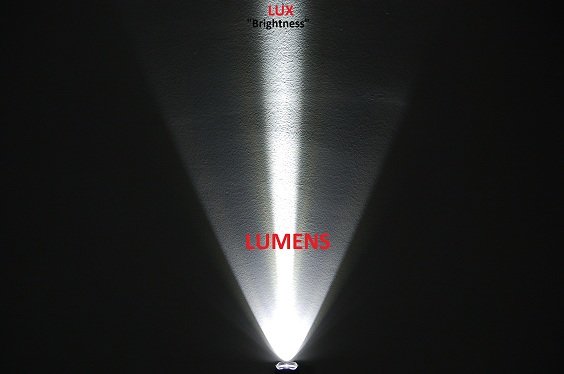 Q. How much LUX do I need?
A. A good observation/baseline provided by our LEO/Military users: "7,500 LUX, allows them to count fingers at 75 meters"!
And note, 2x LUX does not produce 2x throw. LUX to throw generally speaking, has a 2 to 1 ratio (2x LUX, provides approx 50% more throw). Search the internet for "inverse-square law of light", for a full scientific explanation. ;P

Common Misconception: More Lumens makes more throw. No, not necessarily, it is the focus of output, the size of the reflector/head, and the lumens that creates more throw. (We have several lower lumen lights that out throw some of the higher lumen ones!)
EX: In the household, a 100w light bulb, vs 100w flood light, vs 100w spot light all create 100 watts of light (approx 1,600 Lumens), ie. they produce the same 100w/1,600 lumens ~ but the output beam appearance and use is completely dependent on how the light output is focused (an area light, vs flood light, vs spot light).
(FYI, typical relatable conversion is: a 40w bulb produces approx 450 lumens, 60w bulb produces approx 800 lumens, 75w bulb approx 1,100 lumens, 100w bulb approx 1,600 lumens, etc ~ and vice versa)

With flashlights ~ Lumens only tells you how much light is being produced, not how it is focused, by adding LUX to the equation one can determine what type of output should be expected when compared to another light... EX: more floody vs more throwy etc.
Note: WE do not use "Beam Distance" ("the distance in meters at which a flashlight produces a light intensity of 0.25 LUX") as a spec for any of our products, as .25 LUX measurement is meaningless in the real world, and, would also depend on what you were wanting to light up. EX: Seeing a brown barn at 300 meters is far more impressive than seeing a white barn at 300 meters.
Lumens + LUX are the best easily verifiable and objective specs to compare lights.
Want more light output, look at Lumens ~ want more reach/throw, look at LUX.

Q. What about Watts?
A. Watts is generally referring to power/energy consumed, not light output.
Watts is used with household bulbs etc to tell you how much they will cost to operate over x period of time ~ with today's high efficiency LED and circuitry, wattage is not used as it doesn't tell you how much light is being produced, only how efficient or inefficient the LED driver circuitry is. ;P

TIP: A quick and easy way for any user to more objectively compare one light to another light without sophisticated testing equipment is to perform a "ceiling bounce test".
In a darkened room (bedroom, living room, etc) ~ point flashlight up to center of the ceiling, look down to floor and switch light ON... look at the amount of light reflected down to the floor, wall and surrounding area (not on the ceiling). Do this/compare with another light ~ and you can quickly determine the total amount of light being produced with one light vs another light.